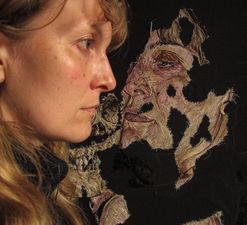 Based in Kent, Emily has been exhibiting in solo and group shows since 1998, she has shown internationally, throughout the UK, regularly in London but predominantly across Kent. Recently winning (2017) a Kent Creative Award for Visual Art (non digital) she has also been a finalist in the Winter Pride Awards (2015), Ruth Borchard Self Portrait Prize, selected for the Royal Academy Summer Show, Mall Galleries, and have been a contestant on Sky Art's Portrait Artist Of The Year in 2014.

Inspiration comes from many sources including Lucien Freud, Francis Bacon, curiosity cabinets, song lyrics, Egyptian tomb painting, ripped wallpaper and the Pre-Raphaelites. The artwork covers a range of subjects based upon everyday life and mythology.
​
I am obsessed with faces.
They show a person’s life, and can look different on a daily basis, a perfect canvas to convey different sides of your character. But more than this my fascination is with the colouration and fragility of skin and within my portraits I strive to bring these issues across. My concern is more with the flesh then the actual likeness, but I want to equally portray the skin alongside a representation of the sitter.
The faces are exposed to close scrutiny, emphasising the fragility of the face and person. As we gaze intently at them a combination of senses unfold and question. The fragmented faces allow the viewer to complete their own stories, background stories to an imagined person. The titles of the artworks play an important part not just for myself to feel a certain emotion whilst stitching but to also convey a story (sometime abstractly) to the viewer.
Drawing and mark making play a significant role, repetition of marks, layering on different colours. This can be a violent process,  manic stitching and the sound a needle makes piercing through layers of materials – quick actions due to a short time-scale. These 'routines' and combinations of materials trace my thoughts and fixations of the thread/skin and lead to an ongoing exploration of abstraction.

Since 2011 I have used wildlife imagery to experiment with fabrics, predominantly British species but I am inspired by curiosity cabinet displays, my mother's Bee collection and plastic pollution.

I am striving to close the gap to what is deemed 'craft' and what is 'art', as part of that co-founding S.E.W - Society For Embroidered Work, supporting and promoting artists who have a stitched element to their artwork.